‘Little Nemo’ by American cartoonist Winsor McCay was commemorated this week by Google in a very special version of one of their infamous headline images, or ‘doodles’ as they are known. It is the first time an interactive comic strip has been used as a doodle.

McCay’s work included comic strips and animations, with the artist credited as an inspiration to many industry giants including Walt Disney. The popular character of Little Nemo first appeared in the New York Herald and New York American newspapers in 1905. Originally called ‘Little Nemo in Slumberland’, the iconic images and adventures celebrated their 107th birthday this week.

With Google’s largest ever ‘doodle’ being revealed this week, I take a look at my favourite doodles in the last 12 months and what they mean to me.

5) The 46th Anniversary of the first broadcast of Star Trek 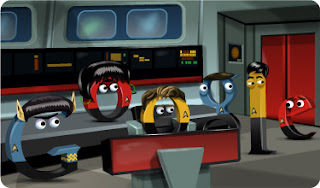 This interactive logo is a feast for Trekkies like me, with classic sounds from the TV series and affectionate digs at some of the more nerdy in jokes, such as the poor redshirt's inevitable state. Raised to love early Star Trek by my Dad, despite it being on the third or fourth set of re-runs when I was born, I adore the hidden sections of this doodle and love the act of celebration from unrepentant fellow Trekkies at Google.

Whether you loved it or hated it, no one could ignore the Olympics in 2012. Dominating political speculation about the economy, TV coverage and newspaper column inches and getting a firm grip on retail products and marketing, the Olympics was everywhere. Google produced a massive 17 Olympic themed doodles, a truly Herculean effort (get it?)

Amelia Earhart is a true symbol of courage and determination, as well as being a hugely strong female figure and an icon of millions. The first female pilot to cross the Atlantic Ocean and proud holder of the U.S. Distinguished Flying Cross, her disappearance over the Pacific Ocean in 1937 is still remembered as a great loss to America and to the world. As a woman, I find her commitment to women's rights and her strength in the face of Victorian society's perception of women a true inspiration.

Great Britain loves a party and it loves it's royalty. In 2012 we got to throw a massive party for our respected and adored monarch, Queen Elizabeth II. Music, dancing, art and history blended together with street parties and memorabilia. Some called it stunning, others felt it was tacky, but everyone agreed, it was an incredible moment for Britain and her Queen. For me, it was a reminder that despite all the changes in the world and the speed of development, we could still embrace a symbol of tradition and continuity. Not literally embrace, obviously. Unless you fancy life in the Tower.

When I was given the novel 'Hard Times' as one of my essay titles at A level English, I was delighted. I had read 'Great Expectations' many years before, but had been distracted by modern novels since. Growing up in the beautiful town of Bath, with its huge Georgian houses and its popularity for Victorian period film makers, I was more than happy to indulge in the works of what I, and many others consider the greatest authors of that age. Google joined the rest of the world in celebration of his 200th birthday with this stunningly detailed doodle.

and last but not least...

Although not an actual doodle, the Zerg Rush 'easter egg' was a joy to behold. As a lifetime Blizzard fan, it was wonderful to watch my screen being devoured in a hungry homage to Starcraft.